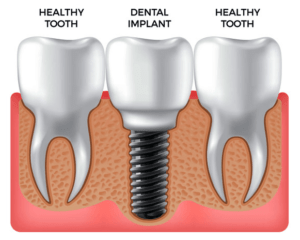 A dental implant is a surgical procedure where a titanium post that looks like a root is inserted into the jawbone under the gum. The root helps a dentist to mount and replace a tooth or a bridge. Dental implants are firm and they do not loosen. Unlike other teeth procedures like bridges, implants are beneficial since they are independently anchored to the gum.

Who Qualifies for Dental Implants?

Initially, the dental implants were introduced to the people who had lost all their teeth. People who had problems with stabilizing and tolerating the dentures because of loss of the jawbone caused by the resting of dentures. Most people knew that osseointegration was the best treatment for loss of teeth in the lower jawbone. A dentist named Dr. John Hunter then came up with the idea of transplanting teeth between living things. He carried out an experiment by implanting a tooth into a rooster comb. The findings showed out that the tooth engrafted to the comb of the roosters blood vessels grew at the pulp of the tooth. This experiment led to the creation of dental implants.

Other dentists began collecting teeth from underprivileged and cadavers and used them for dental implants. While doing this, Dr. Hunter was studying the human mouth through observing bodies from the people who robbed graves. By this, he was able to document details of the anatomy of the human mouth.

Later in 1809, J. Maggiolo, a degree holder in medicine positioned a golden implant tube into a missing tooth. As the site of the tooth healed, he added a crown and observed the aftermath. Inflammation occurred in the patient’s mouth immediately after the procedure. The following years, were full of experiments of medical and dental experiments with various materials experimented with many different materials such as corrugated porcelain, iridium tubes, and silver capsules.

The major causes of failure was the rejection of the material used as an implant with the human bone. Normally, a successful implant includes the fully involvement of the material permanently blending with the jawbone. The major reason of rejection is the fact that the dentists did not know the correct material to use in a patients’s mouth, and most dentists did not know about the dental anatomy of humans. The blending of the tooth together with the foreign body was through a process called osseointegration.

As the research continued, dentists found expanded their knowledge about suitable teeth materials and in 1952, an orthopedic surgeon came across specific properties that were required for a successful fusion. This result was brought about by a successful fusion of a femur bone together with a titanium cylinder. As the fusin was healing, the surgeon found out that this fusion could be used in other fields like the dental implantation process. Hence, the first successful human dental implantation was carried out in 1965 in a human volunteer.

This success later led to a drastic change in the dental department since improvements in the replacement of teeth could be carried out confidently. The use of titanium alloy screws was embraced, but through the use of rough surfaces that were said to boost the process of osseointegration. The titanium screw is secured to the jaws of the missing tooth, then time is given for healing to take place, which allows the fusion to the jawbone. Later, a crown is implanted over the screw.